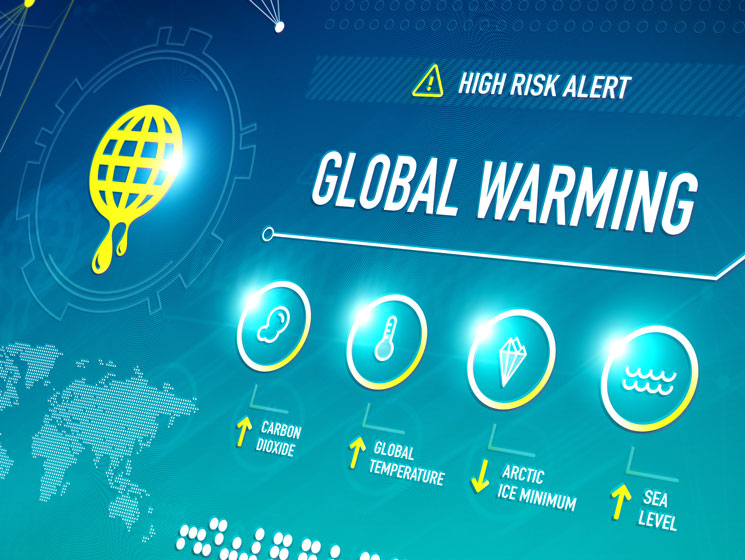 Does it feel hotter to you than normal lately? If so, you're not alone. According to NASA, the planet's average surface temperature has risen by nearly 1.62 degrees Fahrenheit or .9 degrees Celsius since the late 19th century, a change that with 95 percent certainty was created by human-made carbon emissions into the atmosphere. Most of this warming has occurred in the past 35 years, with 2016 as the warmest year on record.

As a result of global warming, oceans have also gotten warmer and more acidic, damaging sea life, and ocean levels overall have risen as a result of shrinking ice sheets. The number of extreme weather events has increased as well, including record high temperatures and rainfall in the United States. Furthermore, climate change has led to an increase in the amount of infectious diseases according to the World Health Organization (WHO).

What can be done about climate change?

The largest contributor to climate change for which humans are responsible is the Greenhouse Effect caused by carbon emissions, especially those that are the result of humanity's demand for energy. Many companies in the U.S. and throughout the world have begun to take steps to reduce their carbon footprint, including Big Oil companies such as Shell and BP which have increased their investments in low-carbon technologies. However, there's a lingering question as to whether it will be enough to stop or even slow the warming trend before even greater, more serious consequences occur.

The authors of a United Nations report on climate change indicate that up to a 1.5 degrees Celsius increase in global temperatures would be the limit of a "safe" warming trend. Anything beyond that would lead to significant and potentially devastating effects to our way of life as we know it.

In 2015, the Paris Agreement established the goal to restrict the global temperature increase at or below a total of 1.5 degrees Celsius. Our current warming trend is nearly .2 degrees Celsius per year, meaning that we'll reach the 1.5-degree threshold in the 2040s unless we do something to slow or stop climate change now. One of the things the Agreement says must happen is for energy generation from coal to decrease by two-thirds by the 2030s.

Where WISE technology fits within the need to reduce climate change

WISE Distributed Energy technology is a decentralized energy system that leads to increased energy efficiency which is crucial to limiting the global temperature increases. It can be integrated with renewable energy sources that further increase energy efficiency and reduce waste. When combined with WISE Lifestyle Management, it empowers homeowners, business owners, and facility managers to automate their energy generation and usage according to their exact needs so that none is wasted.

It’s up to all of us to do our part to reduce climate change for both ourselves and for future generations. Intelligent energy storage and renewable energy technologies provide the means to get there, but we must choose to follow the path to a more energy efficient future.